The state of Odisha continues to be one of the most backward and poorest states inspite of its rich natural and human potential. The disaster and emergencies compound the poverty. The diluted public accountability and poor access and control over food and livelihoods entitlement programs like Targeted Public Distribution Program (TPDS), ICDS Supplementary nutrition program and Mid-Day Meal (MDM) program and National Rural Employment Guarantee Program do not generate desired impact on hunger and nutrition.

The prevalence of stunting and wasting among the children less than 5 years of age are 34.1% and 20.4%, respectively. Almost, 8% children are severely affected malnourished (SAM) and 30% children fall under Grade I-IV malnutrition. The infant mortality rate (IMR) is 40 and the Maternal Mortality Rate (MMR) is 237. The recommended dietary intake (RDI) gap for most nutrients is more than 50%. Only 54.9% children between 6-8 months receive solid and semi-solid food and breast milk and 8.9% children age 6-23 months receive an adequate diet. 51% of women age 15-49 years and 44.6% children 6-59 months are anaemic in the state. Good sanitation, hygiene and safe drinking water have a bearing on good health and nutrition. Strangely, 77.7% households in Odisha are practicing open defecation. As per Odisha Economic Survey, growth rates of GSDP- 13-14 are only 5.6%. The state does not have a baseline on micronutrient deficiency and obesity situation. As in national data where 16.5% women and 17.2% men aged 20 + are overweight, the state is likely to have a similar trend.

The uneducated (with low cognitive ability) and unhealthy labor force significantly slows down productivity, economy and growth. The culture of silence, passivity and circle of uncertainty strangulate aspirations of present generation in infancy. Its 23% Scheduled Tribe (ST) and 17% Scheduled Caste (SC) population are worst victim to perpetual poverty and marginalization. As a result, the state reels under a poverty and backward tag and figures high in malnutrition, poor health and hunger map prominently. 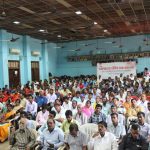 The State level organic farmers’ convention was organised by Agragamee on 27th October 2017 at the auditorium of Institute of Engineers. There was also a display of farm products and dialogue among farmers along with the convention.

In the first session of discussion Mr Balakrishnan, Development Commissioner highlighted the need of food diversity and goal behind initiation of Millet mission in the State and emphasised the importance of micro nutrient requirement among the population. Secretary Agriculture, Mr Saurav Garg welcomed the initiative to bring together the organic farmers in such huge number and assured that the State Government will be taking proactive steps to promote organic farming by ensuring reasonable minimum support price and making inputs, subsidy and training available to them. Food and Trade Policy Analyst, Dr Devendra Sharma, talked about various concerns and bottlenecks for organic farmers and agriculture sector in general and pointed out how policy decisions at different phase of time have impacted agriculture sector and what is the solution ahead. Professor Radhamohan, Environmentalist, discussed in detail the plight of organic farmers in the State.

The recommendations from the convention will be presented before the Government.