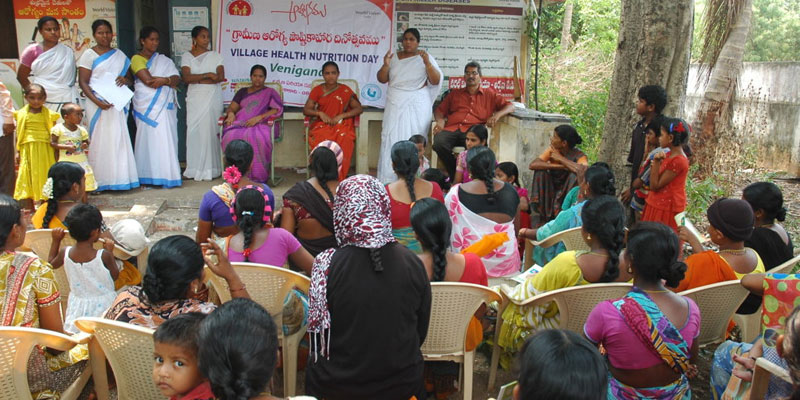 The Block Operational Strategy (BOS) was an important driver to operationalize the Leadership Agenda for Action (LLA) developed by nutrition experts, activists and think tanks from health and nutrition community.  As detailed by the conceptual framework of malnutrition developed by UNICEF, malnutrition is caused due to multiple factors. Thus a multi-sectoral approach and convergence amongst different departments and stakeholders is needed in order to break the vicious cycle of malnutrition.

World Vision India took the effort to translate LLA through block operational plan project in 36 districts across 6 states in different geographical areas with three key approaches viz. convergence, system strengthening and capacity building. Based on Ministry of Women and Child Development’s guidelines issued on 31 March 2011 to constitute 5 tier Monitoring & Review Committees discussions were held with concerned officers at block and district level. States like Andhra Pradesh had formulated their own convergence guidelines termed as ‘Maarpu’ to ensure convergence amongst main departments.

The convergence platforms were vibrant and active where governance system was strong and the accountability was given to the convening officer, basically the child development project officer (CDPO). They were made accountable to report vertically upwards on the progress of convergence meetings at each level.  Marpu model for convergence was one of such model which was fitting within LLA framework.

I strongly felt that convergence was evident in this model since it was a priority and there was a mechanism to report to the government system. Convergence Committee meetings were convened at village level, PHC level to review service delivery, cluster level (CLCC) and district level (DLCC) and reported to next level up to the district level. I have observed that village and PHC level convergence meetings were critical and it needed consistent motivation and support till they become part of the governance system. World Vision played a vital role in co-facilitating convergence meetings at village, PHC and cluster level and sustaining it. There was a good representation of key departments such as Health, ICDS, PRI, Mandal Development Office, Agriculture and other key stakeholders in the meetings. Being a special invitee for the convergence meeting World Vision India used to share two important reports in every meeting. First, assessment report on delivery of key health and nutrition services including skills of AWWs and their home visits status. Secondly, an assessment report of Village Health Nutrition Day/Fixed Days Health Services observation, which includes engagement of other service providers in this process. Within 5 tier monitoring & review committee, Anganwadi level monitoring & support committee (ALMSC) have worked well in Prembalur & Marungapuri blocks in Tamil Nadu due to the support of a local facilitator.

On the other hand, convergence approach took time to emerge in other states as compared to Andhra Pradesh. The representation of nutrition sensitive sectors viz. agriculture, PHED, PRI, Education and other sectors was, at times, limited due to lack of participation and/or poor data to prepare an agenda for meeting and keep it focused. It was also observed that meeting would revolve around ICDS if there was no specific agenda for the meeting.  Even though the department level convergence was challenging, community level convergence worked well in some of the operational sites, for example, enhancing the functioning of Village Health Nutrition Day (VHND). In contrary, we observed that Village Health , Sanitation and Nutrition Committees (VHSNCs) did not perform as expected due to low priority given from the key departments. With these observations, it is evident that accountability and priority of sectoral department and their degree of participation is important to have convergence among these departments.