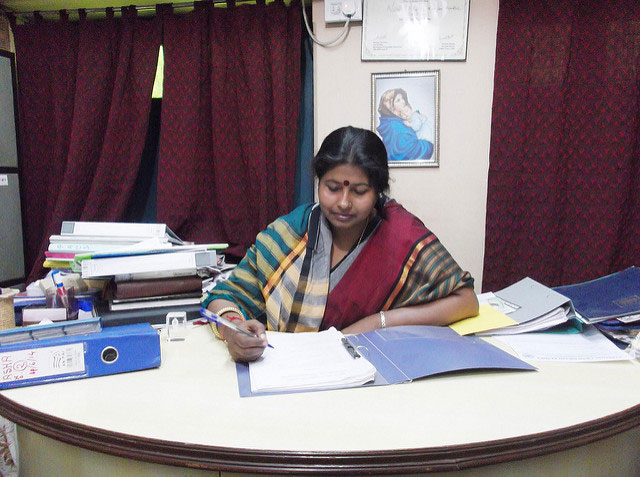 Indian women are an epitome of compassion, strength, dedication and strong acumen. The success of women as social entrepreneur in India has demonstrated that they have earned this reputation quite deservingly. This month story features a woman from West Bengal who singlehandedly led a movement to establish and reinforce women’s literacy, right to life and women’s role in the society.

It was way back on 1978, Rahima Khatun was only 12, when the screams of the hungry, malnoursiehd and homeless people after the devastating flood in West Bengal jolted her tender soul. She expressed her concerns to her father Muhammad Moinuddin, who was a legendary social worker and never believed in a world to be dominated by men; he patted Rahima’s back to follow her heart. There she started and mobilised a few young female localites to volunteer in order to provide support to the flood victims with a dream to overcome this financial menace through creating livelihood opportunities. Soon within a years’ time, in 1979, Nari-O-Sishu Kalyan Kendra (NOSKK) came into existence to promote development activities such as, adult literacy, vocational training etc. for the marginalised as means of self-development for economic stability. She started her work from Khaskhamar village of Howrah and later expanded it to neighbouring districts of Uttar Dinajpur, Murshidabad, Dakshin Dinajpur and South 24 Parganas.

Rahima popularly known as Renu, Secretary of NOSKK said, “Invitation to the Beijing ‘World Women’s Conference on ‘Peace, Development and Equity’ in 1995 was an inspiration that widened my perspectives towards development having equity at its centre point”. After coming back from Beijing Rahima focused on promoting participation of local governance and changing the status of the Muslim Women in Panchayat Raj especially empowering women to address malnutrition. Her mission was to mobilise women from Muslim community bringing them into self-help groups and building their skills and capacities to change the socio-economic status of Muslim Women.

As the recognition grew, Rahima saw an opportunity to expand the scope of work for NOSKK to bring more transformative changes and build a self-reliant society. The organisation has closely worked with the State Government, right based organisations, networks and alliances and pioneered many innovative programmes on mitigating hunger, malnutrition, poor sanitation and hygiene. Over last three decades NOSKK’s focus has been on the most marginalised people, especially women and children coming from socio-economically and culturally vulnerable background to make them self-sustained promoting livelihood with a right based approach. In the journey, NOSKK has created many community institutions for the excluded groups to generate social, political, economic and health awareness among them. Nutrition health education for pregnant women through Mohila Mandals is one of their unique and successful models of NOSSK.

In line with the Government of India’s Swacch Bharat Mission, NOSSK has also expanded its programme outreach to cover adolescent girls and educate them on menstrual hygiene. 3 Gram Panchayats are covered under the programme and the focus is more on social behaviour change for an improved demand, access and use of proper sanitation and hygiene. NOSSK has a production unit managed by self-help group ladies who make cost effective menstrual pads to be used by the financially backward communities.

Relentless efforts to serve the underprivileged brought plenty of accolades like ‘Maulana Abul Kalam Azad Prize 2011’, ‘Rajya Mahila Samman 2014’, ‘Indian Express Public Health Award 2016’ for her. While asked about her feelings as a recipient of such prestigious awards she humbly responded, “Success smells sweet only when I see change in the life of the people for whom we work”.