Among mothers who gave birth in the five years preceding the survey, more than 9 in 10 received antenatal care for their last birth from a health professional (75% from a doctor and 11% from an auxiliary nurse midwife (ANM), lady health visitor (LHV), nurse, or midwife). Five percent did not receive any antenatal care (ANC).

Sixty-eight percent of children under 6 years received services of some kind from an anganwadi centre in the 12 months preceding the survey. The most common services that age-eligible children receive are supplementary food (66%), growth monitoring (69%), health check-ups (65%), and immunization (60%). The service that is least likely to be accessed is early childhood care or preschool (58%).

Although breastfeeding is nearly universal in Gujarat, only 65 percent of children under 6 months are exclusively breastfed, as the World Health Organization (WHO) recommends. Eighty-six percent are put to the breast within the first day of life, but only 38 percent started breastfeeding in the first hour of life (as recommended). While exclusive breastfeeding indicators show an improvement since NFHS-4, many infants are still deprived of the highly nutritious first milk (colostrum) and the antibodies it contains. 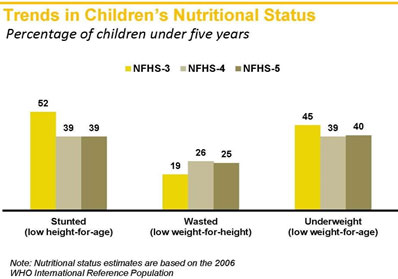 Four-fifths of children age 6-59 months are anaemic. This includes 28 percent who are mildly anaemic, 49 percent who are moderately anaemic, and 3 percent who have severe anaemia. The overall prevalence of anaemia in children increased from 63 percent in NFHS-4 to 80 percent in NFHS-5. There is no difference in the prevalence of anaemia among girls and boys in NFHS-5. Children of mothers who have anaemia are much more likely to be anaemic. Although anaemia levels vary somewhat according to background characteristics, anaemia among children is widespread in every group. Over three-quarters (77%) of children in Gujarat are anaemic even if their mother has 12 or more years of schooling

There is an urgent need to address malnutrition in the state with coordinated efforts.

The coalition partners have realised the need for a state coalition chapter which will be a platform for leveraging the efforts done by various development actors, bringing about stakeholder and message alignment, and influencing the policy makers.