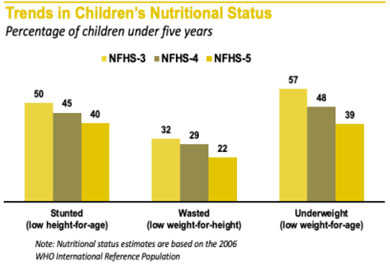 More than one-third (38%) of women and almost one-third (32%) of men are either too thin or overweight or obese. Among women aged 15-49, the proportion overweight or obese is 12 percent, which is slightly higher than NFHS-4 (10%). More men are thin (17%) than overweight or obese (15%), which is similar to the pattern observed in NFHS-4. Ten percent of women in Jharkhand are too thin. Almost two thirds of women (62%) and just over two-thirds of men (68%) are at a healthy weight for their height. Under nutrition is particularly common in the younger age groups (especially age 15-19), in rural areas for women, and among scheduled tribes and scheduled castes

Among mothers who gave birth in the five years preceding the survey, almost 8 in 10 received antenatal care for their last birth from a health professional (43% from a doctor and 36% from an auxiliary nurse midwife (ANM), lady health visitor (LHV), nurse, or midwife). Eight percent did not receive any antenatal care (ANC).

Sixty-five percent of children under 6 years received services of some kind from an anganwadi centre in the 12 months preceding the survey. The most common services that age-eligible children receive are supplementary food (60%), immunization and growth monitoring (55%-57%), health check-ups (52%), and early childhood care or preschool (44%). The service that is least likely to be accessed is early childhood care or preschool (44%). Slightly more than seven out of ten (71%) mothers of children who were weighed at an anganwadi centre received counselling from an anganwadi worker or an ANM.

Although breastfeeding is nearly universal in Jharkhand, only 76 percent of children under 6 months are exclusively breastfed, as the World Health Organization (WHO) recommends. Eighty-eight percent are put to the breast within the first day of life, but only 22 percent started breastfeeding in the first hour of life (as recommended). While exclusive breastfeeding indicators show an improvement since NFHS-4, many infants are still deprived of the highly nutritious first milk (colostrum) and the antibodies it contains quarters (74%) of their mothers received any service while breastfeeding.
Almost two-fifths (59%) of women and 47 percent of men have a waist-to-hip ratio (WHR) that puts them at a substantially increased risk of metabolic complications. 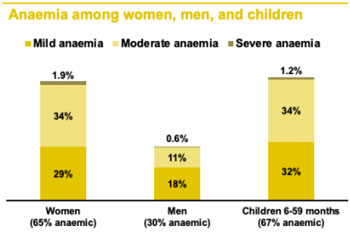 Anaemia is a major health problem in Jharkhand, especially among women and children. More than two-thirds (67%) of children aged 6-59 months are anaemic. This includes 32 percent who are mildly anaemic, 34 percent who are moderately anaemic, and 1 percent who have severe anaemia. The overall prevalence of anaemia in children decreased from 70 percent in NFHS-4 to 67 percent in NFHS-5. There is little difference in the prevalence of anaemia among girls (68%) and boys (67%) in NFHS5. Children of mothers who have anaemia are much more likely to be anaemic. Although anaemia levels vary somewhat according to background characteristics, anaemia among children is widespread in every group. A little less than two-thirds (64%) of children in Jharkhand are anaemic even if their mother has 12 or more years of schooling.

Based on the findings from the evidence, technical and research studies, the CFNS and the potential partners will jointly work to take the Coalition agenda forward. In order to expand and catalyse the actions, the multi-stakeholder platforms at state and district level will work on revitalizing coordination and convergence mechanisms at sector, village and local governance level for a better impact delivery of nutritious foods.