Among mothers who gave birth in the five years preceding the survey, 92 percent received antenatal care for their last birth from a skilled provider/health professional (91% from a doctor and 1 percent from an auxiliary nurse midwife (ANM), lady health visitor (LHV), nurse, or midwife). Seven percent of mothers did not receive any antenatal care (ANC).
Forty-two percent of children under 6 years received services of some kind from an anganwadi centre in the 12 months preceding the survey. The most common services that age- eligible children receive are supplementary food (41%), immunizations and early childhood care or preschool (16% each), and health check-ups (10%). The service that is least likely to be accessed is growth monitoring (9%).

Although breastfeeding is nearly universal in Manipur, only 71 percent of children under 6 months are exclusively breastfed, as the World Health Organization (WHO) recommends. Eighty- nine percent are put to the breast within the first day of life, but only 53 percent started breastfeeding in the first hour of life (as recommended). While exclusive breastfeeding indicators show an improvement since NFHS-4, many infants are still deprived of the highly nutritious first milk (colostrum) and the antibodies it contains. Children breastfed within one hour of birth is highest with 68 percent in Tamenglong district and least with 43 percent in Bishnupur district. 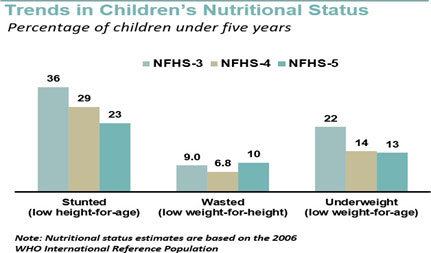 Children’s nutritional status in Manipur has not changed much since NFHS-4 by all measures. The percentage of children who are stunted decreasedslightly from 29 percent to 23 percent in the 4 years between NFHS-4 and NFHS-5. The percentage of children who are underweight (13%) has slightly changed from NFHS-4 (14%) and wasted (10%) has increased since NFHS-4 (7%). However, the continuing high levels of undernutrition are still a major problem in Manipur.

More than two-fifths (41%) of women and 38 percent of men are either too thin or overweight orobese. Among women age 15-49, the proportion overweight or obese is 34 percent, which shows an increase of 8 percentage points since NFHS-4 (26%). More men are overweight or obese (30%) than thin (8%), which is similar to the level observed in NFHS-4. Seven percent of women in Manipur are too thin. Around three-fifths of women and men are at a healthy weight for their height.

The overall prevalence of anaemia in children increased from 23 percent in NFHS-4 to 43 percent in NFHS-5. There is no difference in the prevalence of anaemia among girls and boys. Children of mothers More than two-thirds (43%) of children age 6-59 months are anaemic. This includes 25 percent who are mildly anaemic, 17 percent who are moderately anaemic, and less than 1 percent who have severe anaemiawho have anaemia are much more likely to be anaemic. Although anaemia levels vary somewhat according to background characteristics, anaemia among children is widespread in every group. Over two-fifths (41%) of children in Manipur are anaemic even if their mother has 12 or more years of schooling. Among the districts, half of children age 6-59 months in Imphal East district are anaemic, followed by Senapati district (49%), and lowest in Ukhrul district (35%).

Twenty-nine percent of women in Manipur have anaemia, including 19 percent with mild anaemia, 10 percent with moderate anaemia, and 1 percent with severe anaemia. Anaemia is particularly high among urban women, women age 40-49, and scheduled caste women, but anaemia exceeds 26 percent for every group of women. Anaemia among women has increased by 3 percentage points since NFHS-4. Around 6 percent of men in Manipur are anaemic. Men age 15-19 and age 40-49 and in rural areas are particularly more likely to be anaemic

There is an urgent need to address malnutrition in the state with coordinated efforts.The coalition partners have realised the need for a state coalition chapter which will be a platform for leveraging the efforts done by various development actors, bringing about stakeholder and message alignment, and influencing the policy makers.